Don’t worry, I’m not about to throw in my 2 cents on biking or doping. Far better people have already flogged the subject to death. I do, however, have something to say about cancer.

I stopped giving a shit about Lance Armstrong in 2008. While Strachan was sick, I worked with the Cedars Cancer Institute. They are a remarkable group who support patients, research and facilities in Montreal. Executive Director Jeff Shamie – a fantastic ordinary person in his own right -had his sights set on Lance since he started.

He succeeded and Lance has partnered with Cedars since 2008. For a weekend each year, they have invited people to ride, dine and paddle with him.  All told, Cedars has used Lance fever to help raise over $8 million for legitimate cancer causes.

I balked at his appearance fee. Out of respect for Cedars I won’t reveal it. It’s worth it as they have successfully leveraged it to raise much more.  But I cringed that someone would use cancer to maximize his own marketing potential, make millions off of it and then masquerade as a hero while pocketing hard earned fundraising dollars from star struck average joes.

I barfed in my mouth a bit when he demanded a list of pre-approved people he would meet. I lost interest completely when he showed up with bodyguards to keep cancer survivors, family members, medical practitioners and volunteers away. Go ahead and keep me off your list Lance, permanently.

My real biking hero -Lala. On the same day Lance rode 109km around Cape Town then flew off in his private jet. Lala did it to raise awareness for Hoops 4 Hope on a100 lb mountain bike with a busted seat post and bball hoop attached.

I understand that we need heroes, but Lance has done as much for cancer patients as the Kardashians have for young girls. He believed the hype and acted better than other people and the disease.

Lance didn’t defy odds, he got lucky. By allowing the world to believe he conquered cancer like he did the Tour de France, he reinforced a dangerous message. Millions die of cancer every year (7.6 in 2008). If you are among them, is it because you failed to conquer?

My brother fought cancer for 21 months before he passed. He didn’t fail at anything. He woke up every single one of those mornings and faced it like a warrior. His wife did too. I don’t expect to see anything so inspiring again and have never, ever been more proud to be his sister.

When diagnosed with cancer, you are told immediately that attitude is half the battle. We put our gloves on. If this needed character, we had it. If he himself needed an off-day, the rest of us had the will to make up for it. We even took his B positive blood type as a message.

My only regret through Strachan’s illness was not encouraging him to contemplate his mortality. I was too scared that talking about it meant giving up and too busy cheerleading to know if he did too. I’m sorry if he had to protect us from a hard process or deal with it on his own. I’m even more sorry if he ever felt like a failure for it.

Death and disease should humble the very strongest among us. So on behalf of someone who lost the best person I know to cancer, you’re a dick Lance.

For the people who feel like they lost a cancer hero in Lance, there are so many better ones out there. Here’s just a few: 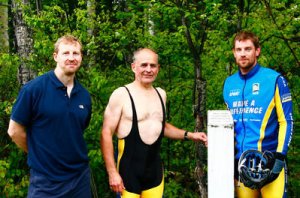 My Dad (in a unitard), Todd and Stu during the Make a Difference marathon in at the exact spot Terry Fox ended his Marathon of Hope

Terry Fox, the real Canadian hero, ran a marathon a day across Canada on one leg, the other amputated due to bone cancer. He wore tattered sneakers, had a one-man support team and a fruit-sized tumor in his lung. I had to explain him at University in the USA – “He didn’t make it?” Nope, he died half way. His foundation has raised $600 million for cancer since.  Strachan ran the Terry Fox run the week he re-lapsed with a football sized tumor in his chest.  We run it every year. 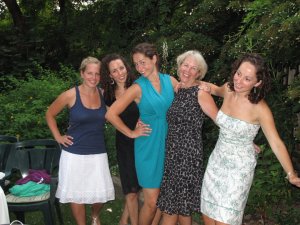 Lynny with her 4 girls at Tasha’s (in turquoise) wedding. Her Dad wasn’t there to walk down the aisle. They missed him but had fun too.

Dr. Norm Saunders, legendary Toronto pediatrician, father of 4 and husband to my favorite Granny was diagnosed with terminal colon cancer at 55 and given 6 months to live. Afterwards, he fought the government to provide patients with a life-extending drug, on principal.  He could afford to pay for it, but others couldn’t. He won. He also raised $1.4 million for children with complex illnesses before he passed away at 60. 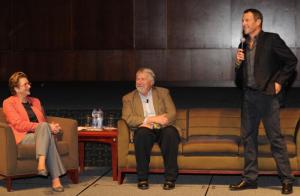 Gwen (left) on stage at a cancer summit with Lance (right). Time to pass the mic I say.

Gwen Nacos, my friend and mentor, was diagnosed with stage 4 bladder cancer while pregnant and given a 10% chance. 29 years later, she is a business dynamo, wears fur and drinks designer coffee.  She founded Cedars CanSupport, has raised at least $15 million and puts in 40 hours a week to fight like a (highly organized and effective) pit bull for the cause. I met her following a gratuitous introduction about how she survived cancer, she looked me in the eye and said ‘forget that nonsense, it’s dumb luck’.

My parents, who lived out their worst fear and are left to face the emptiness daily. The struggle to find new meaning is relentless. They do it anyways, because they’re still here. Or the chubby guy down the street who you have never noticed. He underwent chemotherapy 10 years ago, sings out of tune, never misses his kid’s soccer games and defies doctor’s orders by eating a bit too much steak because he loves it. He now knows what life is really about. It ain’t the Tour de France.