“Gravity, stay the hell away from me.”  John Mayer

I met Emily as a teenager. We grew up ski racing and were teammates on the BC Team a long, long time ago. While I worked my way up to housewife in Port Elizabeth, she went on to become one of Canada’s all-time greatest skiers: 14 year National Team member, 3 time Olympian, World Cup winner and 10 time National Champion. Since training and competing at that level only took up 120 hours a week 11.5 months of the year, she started a Foundation that provides sports to kids in her home town, became a Right to Play Ambassador and sat on the Alpine Canada Board. When she retired in 2010, they declared May 12 Emily Brydon Day in Fernie.

Retiring from elite athletics is a tough transition. You’re 30 years old, moving out of the spotlight and away from the only highly structured reality you have ever known. You give up your support team and have to make up for the education and work experience you sacrificed to represent your country. It’s tough. A real grind. Takes years to find yourself.

Two years out, Emily has completed her MBA at Imperial College and is living in downtown London working as an Operations Manager for BP. Yep, the ‘real world’ is harsh.  Luckily she worked at Second Cup one summer so she had some work experience on her resume. 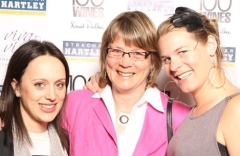 Like anybody with such a fantastic story, the route wasn’t paved with glitter. Emily is 6 feet tall and pushing 200 lbs. She carries it like a rock star and skiing is a gravity sport for shit’s sake. But she was full grown at 15. In addition to full-piece spandex, ski racing involves a lot of dough. It is expensive and reserved mostly for wealthy people with weekend mountain homes. Emily lived at the base of the ski hill in a handmade log cabin in Fernie, population 5000. Her Dad was a snowcat driver and Mom a lift operator.

In case I could be mistaken for a Mean Girl – I was 5’3, 150 lbs and squatting 300 lbs. I wore a 1970s red hand-me-down helmet, skied for the lowly city mountain and had a mono-brow to boot.  Sport saved me in the end, but not before dragging me through some seriously awkward teenage years. I may or may not be projecting these insecurities onto Emily, I never heard her complain.  But I know the world we lived in and it couldn’t have been easy to be the big girl from the small town.

At 18, she lost her father to cancer, leaving her alone with her Mom.  Rosemarie is also 6 foot awesome and spirited. She resolutely “chose life”, first when diagnosed with lupus and again when she lost her husband. But skiing became hard to afford. Fernie stepped in and paid it forward.

All this makes it even easier to root for her. Not only was she the ‘underdog’ in a harsh and competitive world, but she has stayed utterly genuine throughout. She has blossomed into a confident and charismatic woman with an unmistakable ‘joie de vivre’ and kick ass sense of humor, but remains a humble small-town girl at heart.

She’s also got huge balls and the tenacity of a dog on a bone. I mentioned the MBA from one of the world’s most prestigious business schools. I left out that she never met the entrance requirements. You need an undergraduate degree.  But she had already decided to live in London and wasn’t about to settle for a second rate program, so she knocked on their door and asked them to make an exception. It took 14 months, multiple GMAT attempts and several undergraduate courses as a ‘mature’ student among teenagers.

Some BC skiers. Apparently I’m a midget

Similarly, when it came to the job search, BP came looking for Engineers and IT specialists for their highly competitive Future Leaders program. She marched up to the recruiter and asked what they have to offer someone like her, who is neither nor. Within a month she had secured herself 1 of 25 (from 7000 applicants) spots and was interviewing them to decide what department she wanted to work for. She chose lubricants.

She was, however, cautious that they hired her for the right reasons (they did). She moved across the world to become anonymous. She wanted to grow in new areas and add real value, not be the girl in the office that went to the Olympics.

While sitting at brunch recently, it was impossible not to comment on her guts and wish they were my own.  She answers with a shrug, “after you disappoint your whole country, there’s not much left to lose”.

Emily’s final ski season included her 3rd Olympics in Vancouver. Her home turf and hot on the heels of some brilliant results, she carried the hopes of the country as a medal contender.  A less than perfect week was reported by the media as a disaster and by Emily herself as “heart-breaking and crushing”.

With Rosemarie on Emily Brydon Day

Like a proper over-achiever, the disappointment was actually her own – she felt she had let people down. Canada was over it by the first beer at the Nickelback concert. The Olympics were exceptional and they got their best medal haul ever. A top 20 result hardly merits an apology. Canada still loves Emily.

I notice that she now uses this ‘failure’ to gather courage. To summon the VP of a huge company, she doesn’t draw upon all that it took to get up every morning and hurl herself down a mountain at 120 km/hour with only lycra protecting her. Or what went in to recovering from injury or conquering fears to become the best in the world.

In the spirit of this blog, knowing that a World Champion with a day named after her has vulnerabilities is the best kind of ordinary. It means the rest of us can relate. Beneath the powerhouse exterior, she has doubts that she must face just like everyone else. The difference, perhaps, is that she actually does.

I most definitely look forward to whatever comes next from this small town girl.