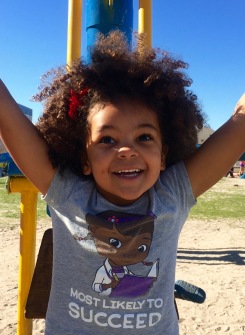 Today I write you my annual letter. I wish I would write you more often, but four years in and my mind remains a pile of porridge. I have also found myself particularly unsettled over the past year and have lost confidence in my voice and how to best use it.

This is a dark beginning to a birthday letter.

Make no mistake about it. Year 4 brought a landslide of love and miracles. You remain an image of God’s perfection and make us so impossibly happy. You are an infectious and determined little girl. Smart, engaging and brave. You moved countries and two schools in the past year seamlessly. We thought you were exclusively my daughter, but you have surprised us with a sensitive, thoughtful side. Watching you grow up sets my heart alight each and every day. You are loved by many and blessed beyond measure to have a worldwide community of caring hands shepherding you through life.

This year also introduced some hard truths. Predictable ones that we saw coming, but still cut deep when they landed.

At age 3, you were denied entry to swim lessons based on our last name and were cursed out by an old, mentally unstable man who does not want to live next door to black people. At age 3, you also became aware that people come in different colours.

It came a couple of months ago while watching  Greys Anatomy. 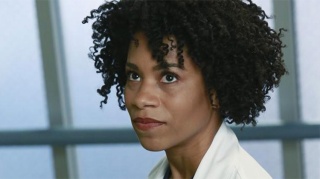 Our 1st ever convo about race involved a hot, black, female doctor and gave me new appreciation for the slow inclusion of diversity in mainstream culture.

“Yes, she is. She is a beautiful smart brown auntie like many others.”

It has become a running dialogue ever since: an ad hoc commentary on ‘brown’ and ‘grey’ people (including the recent astute observation that “the grey people live in Canada and the brown people in South Africa”).   We have made a concerted effort to let you steer the conversation and to merely affirm that yes, people come in different hues and they are all great. So far it appears to be merely observational, but I fear the day it becomes more. 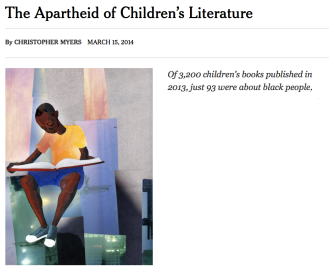 Link to NY Times article. Non-white South Africans make up 92% of the population and the stats are even worse

I know nothing about what it means to grow up brown. I suspect these incidents and observations have marked the beginning of a life long journey. One that will be hard at times.

To be clear, this message is not about personal feelings. We are a family that loves each other plainly and purely. We encourage you to see, love and treat all people the same. But to teach you that this is a universal truth or that racism is limited individual perceptions would be wilful ignorance and, ultimately, fail to prepare you for life.

The world is entrenched in systemic racism (seems an appropriate opener for a 4 year old). It is complicated and we will spend a lifetime building you up for it. But to put it plainly, a significant burden rests on ‘brown’ people.

The clearest way I can think to show this is to compare my own and your father’s journey to meeting each other as ‘equals’:

I come from an amazing family, whose integrity I consider stand apart. We have French and English settler histories in Canada and come from a long lineage of (until recent generations, all male) professionals. We are CAs, engineers, doctors, architects, teachers and more. Your grandparents chose to make me independent at 18; partly to ensure we learned important survival skills and partly because the financial pressure of four teenagers was their upper limit. We were encouraged to follow our dreams and pave our own paths. Four children made our own way through nine University degrees. I have had jobs since I was 16 and a paper route before then. We have worked hard.  We were provided with quality education starting from pre-school. I was exposed to music, language and sports. I was supported – financially and emotionally – through high performance sport that, in turn, paid for both of my degrees and instilled an international worldview.  It was utterly unequivocal – even if unspoken – that we would go to University. We were never asked to factor family responsibility into our decisions. I endured temporary bullying for being able to squat more than the boys, but generally fit in and was accepted by my peers. My passport is accepted universally. I drank underage, shoplifted and got caught by police breaking into the school and putting a car on the roof, yet never saw the inside of a police station. My education, experience and intelligence are rarely questioned. I have travelled to 57 countries and only ever been treated with curiosity. My parents helped me open a bank account at age 11 and when it came time to buying a house (with our own money) I had a litany of advice from friends and family who had already done it. I live in a foreign country where we speak my language, practice my social and professional norms and take advantage of my privileges.

Your father is the first in his direct lineage to graduate University. Extended family members who preceded him did so by the sacrifices of their siblings and parents. Education for his people was strategically dumbed down and made inaccessible. The men were separated from their families and forced to travel long distances from ‘homelands’ to provide labour for white colonists. The women have borne an unimaginable burden without ever escaping poverty. His grandmother did hard labour until the day she died and never understood how someone would pay him to play a game.  He got rejected from kindergarten because he failed the readiness test of reaching over his head and touching his ear. He was sent away from home at age nine for a proper education and held back a year because his foundation was so poor. He has endured corporal punishment and police brutality. He stumbled on sport by accident. He has lost countless family members to treatable illnesses or solvable crimes. His dream was to provide his mother with the standard of living she deserved. She died before he could. He gets treated with suspicion in his own neighbourhood. His name gets mispronounced in his own country. He reads, writes and speaks in a language that is not his own in his own country. Every time he succeeds, someone, somewhere wonders if it is due to a ‘black card’ with invisible advantages. If and when his competency is acknowledged, he is labelled a ‘different’ kind of his people and left to reconcile this with the rest of his loved ones. And he is one of the privileged ones. 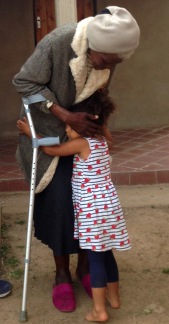 I could not be more humbled or proud of the journey your Dad has walked.  He can teach you patience, tenacity and grace in  ways I never can.  I pray you develop his endurance and quiet sense of confidence against the current of messages suggesting otherwise. Your brown family has fought and died for you to be exactly who you are. Those are rich, lasting gifts that far outstrip financial inheritance.  Please always learn from them, recognise their sacrifices, mourn the potential they were robbed of and carry proudly each action that has led to you.

You can be and do anything you want. You are the perfect recipe, exactly as you are. You come from devoted and proud families on both sides. All of us love you fiercely and are committed, together, to provide you with a wealth of lessons and opportunities. You can and you will claim yourself, rise up and live your best life, regardless of what obstacles may arise. 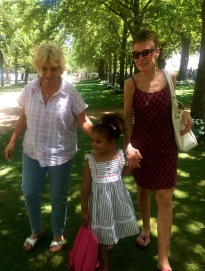 For me personally, I am terrified of failing you. Inadequately preparing you or misdirecting my (often excessive) energy. Parenting involves a lot of stumbling around the dark. No piece more so than this. There is no ‘Grey Mama Parenting Crown Children’ handbook. I have no idea what I am doing nor the opportunity to fall back on what I already know. But I promise to do my absolute best.

We love you beyond measure and are so proud of the girl you are becoming. I continue to mourn the moments and years that have passed, but love absolutely nothing more than watching you live your little life. You are a priceless treasure Khaya Mbiyozo. Please do not ever forget it. 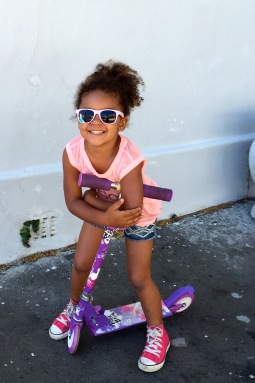 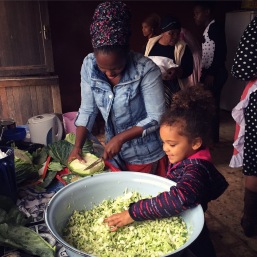 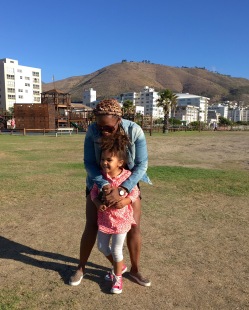 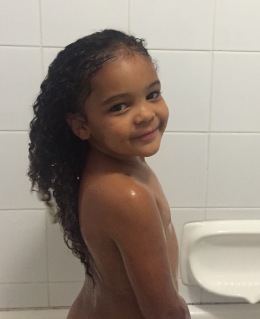 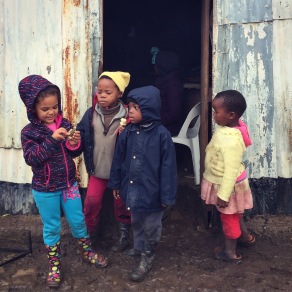 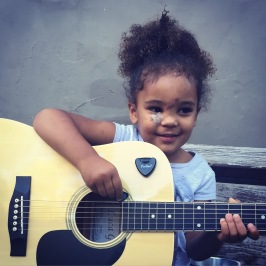 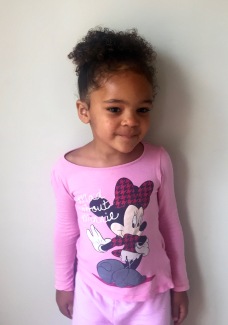 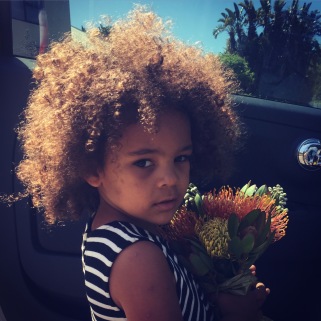 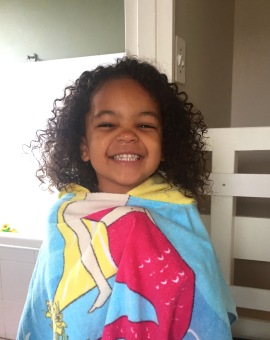 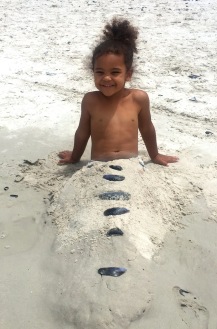 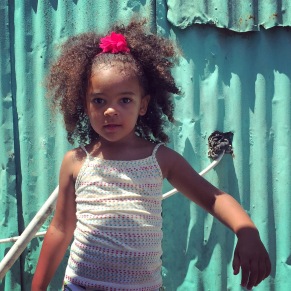 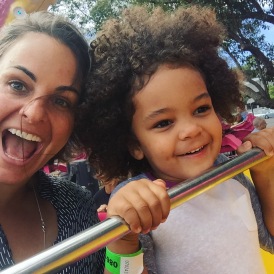 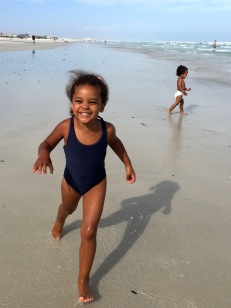 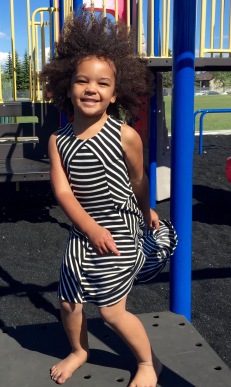 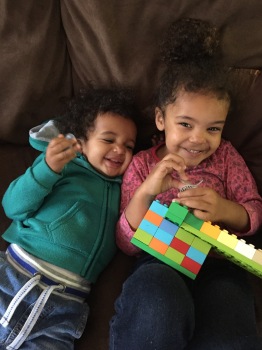