Said friend, Julia, and I at my last race in Vermont, both in tears. We met at 11 and ended our careers at rival schools.

In November, a good friend asked me to write this blog for her website. The purpose of the site is to motivate and guide young athletes to achieve scholarships and success. Don’t worry kids, I didn’t learn my efficiency in college!

Last month marked the 15th anniversary of one of my greatest athletic achievements – becoming NCAA Champion. Three days later, the University of Colorado ski team was named 1999 National Champions and dedicated it to our teammate Lucie Hanusova who was killed that year in a snowmobile accident. An hour later, the wood trophy was floating in a hot tub carrying beers while our coach ran circles around the house wearing a bathing suit in a Maine winter. By 2 am we were all staggering around a college bar trying to remember where home was. It was awesome.

Now I’m old, live in Africa and work in international affairs. My skiing background is essentially irrelevant. The three times a year it comes up each require highly animated demonstrations.

Yet, it is the very reason I am here. 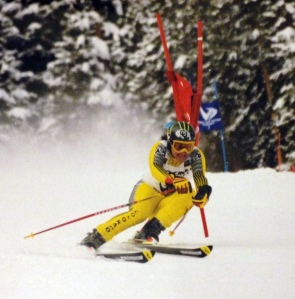 Growing up in international ski racing was both amazing and challenging. Like golf or polo, it is an exclusive sport. It takes money, time and geography. It is pretentious and individualistic. Your teammates are both your best friends and your fiercest competitors and,like many individual sports, your wins and losses are largely your own. I met some of the best people I will ever know and learned life’s richest lessons – how to set goals, cultivate a winning culture and harden against pressure. But man could it be lonely. At 14 I won 4 out of 5 national championships and beat the boys. I set a record and there was plenty of celebration, but beating a bunch of spoiled boys as a teenage girl with one eyebrow and tree-trunk legs turned out to be a pretty ruthless experience. By 18, I was tired and ready for change.

I saw the NCAA as my vehicle to a free education and a chance to live in the America I saw in the movies – tailgating and keg parties with Jim Belushi.

When I left for Boulder in the summer of 1997, the internet was still new and I didn’t have an e-mail address. At the time, college racing was still relatively uncharted waters for Canadian skiers. The ‘system’ didn’t like losing talent to the USA and it was considered a dead end for athletes with Olympic aspirations. Picking a school involved  leafing through a 2000 page manual. I circled Colorado because it had the best football team. I posted letters and called 411 to get coaches’ numbers. I took my SATs in June without preparation, declaring “I’m going straight to the math questions”. When I arrived at the Denver airport in August with a 70 pound hockey bag of all my worldly belongings, it was on the coach’s word – whom I had never met – that I would have a scholarship. We had missed the signing deadlines and the admissions officer responsible for my file had gone on vacation before admitting me.

That this ‘what not to do’ highlight reel translated into the best experience of my life is attributable to dumb luck and the fact that skiing is dominated by equally clueless Europeans. That same year, our star nordic skier was sent back to Norway for having the wrong visa. Another Czech teammate had to defer for a semester while he repeatedly took, and failed, the TOEFL test. Eventually, he watched enough Austin Powers to pass and became an All-American.

My four years in Colorado were the very best and produced a million fantastic memories. I met amazing people, went on wild adventures, traveled internationally, rode my bike all over the state, fell in love, made bad decisions, went to class sometimes and pulled some legendary all-nighters. I loved everything about it and can proudly say that I got the most out of my time there. 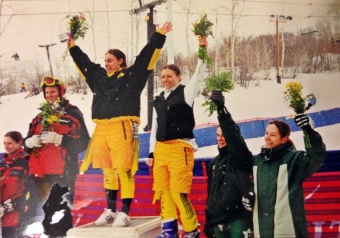 Linda and I shared the podium for both of my titles. She went on to win the slalom 2 days later.

I went on to win two individual and two team national championships. I captained my team for two years and sat on the Student Athlete Advisory Council. I graduated with cum laude honours. I was awarded the inaugural Award of Distinction for the student athlete that contributed the most to their peers and the department, the Leo Hill Academic Leadership Award as the student athlete that demonstrated the strongest academic and athletic leadership and was a finalist for ESPN’s Top Eight Award. I spent my very last semester studying in South Africa and won a NCAA post-graduate scholarship that I used to get a Master’s at the University of Cape Town.

Yet by far the biggest win was one that is much tougher to measure – being a part of a team.

As with all NCAA sports, skiers compete as a team. It is also co-ed and combines alpine with nordic, two sports that are fundamental opposites if not for the snow. When I showed up in Boulder, I was nervous and prepared to have to prove myself and climb a social hierarchy. I was met instead by open arms. My teammates and coaches remain a legendary group of people – smart, talented, attractive and fun. They came from all over the world and had backgrounds that ranged from renown Olympians who bought Harley Davidsons for fun to local no names who worked construction on the side to make ends meet. But the starting point for all was a desire to get along and work together to win championships.

I probably had the talent and grit to churn out some decent results in my own right, but belonging to a genuinely great group gave me the greatest gift of my life – self acceptance. It wasn’t exactly graceful, but they allowed me to soften, settle into myself and become a better athlete, self and, hopefully, teammate. 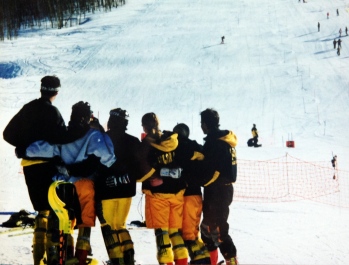 My freshman year I was given the most meaningful award of my life – the Laura Sharpe Flood Memorial Award. Named after a former Buffalo (and sister of another dear friend) who died tragically in training, it is given annually to the skier that demonstrates the most spirit, enthusiasm and dedication.  The year-end banquet took place at a 5-star restaurant. The awards were spelled out on the evening schedule. When I saw my name, I was surprised but planned to be a graceful recipient for once in my life.  When they called my name to receive it, I stood as planned. And to my utmost shock – that remains with me to this day – the room rose with me.  There were far bigger awards for people much more decorated than me, yet I got the only standing ovation of the evening. Time stood still, I was bewildered and had to fight hard to hold back tears. I have never felt more validated. Being celebrated by a group of truly exceptional people for such a simple contribution was a reward unlike any other.

I can only hope I was able to give my teammates a piece of what they gave me.Of course nobody can promise you will end up on a good team, but my advice to any young athlete embarking on this awesome 4 year journey: be a good teammate.  It is worth much more and lasts much longer than any trophies.

Buffs at my wedding in South Africa 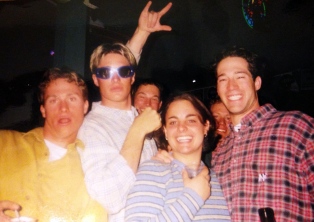 Buchheister brothers back when plaid was cool