“Of two sisters one is always the watcher, one the dancer.” ― Louise Glück

My sister. Lucky girl. She loved it. When I was 16 and bored I decided to abandon my own perfectly good bedroom and move into hers. Our one alarm clock was on her side of the room. She had to wake up earlier than me and would re-set it so that I would not sleep through class. Invariably, everyday she had to run back up the stairs to turn it off while I stayed under the covers like a hibernating bear, too lazy to get up. Amazingly, if you let any noise go on long enough, it can start to sound good. 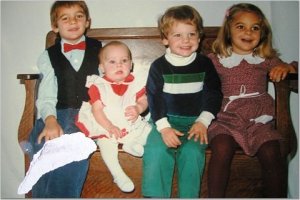 Blythe is the only person that I remember being born (including my daughter, but that’s selective memory).  I was 3, got to wear my brand new pink track suit and go on a field trip with my brothers. I don’t remember bringing her home and the next couple years are a blur, but the significance of that day was unmistakable. It remains one of my earliest memories.

This weekend, my little sister was inducted into the Alberta Sports Hall of Fame. The next day, she ran a half marathon (just for fun in 1:39) with a group of 40 people who fundraised over $8,000 for a charity in our brother’s name. 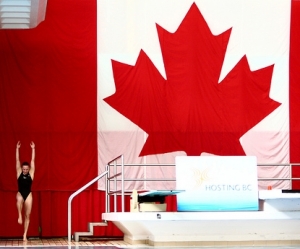 I know very little about what the Hall of Fame said about her. Getting her to talk about herself is like pulling teeth. She is frustratingly self-deprecating. I speculate they honoured her 12 years on the Canadian National Diving Team, 25 National Titles, 2 World Champion Titles,1 World Record, 5 Commonwealth medals, Olympic medal, 5 NCAA Titles, Pan American, Goodwill and World Cup medals. Something like that.

It goes without saying that Blythe is one of the highest achievers I have ever known. Growing up, she was better than me at absolutely everything. She remains the most gifted athlete I have ever met, I am certain she could have gone to the Olympics in any sport. By 6 she had dozens of swimming records. Her elementary school high jump and track records still stand. Her report cards sparkled. Teachers loved her, she was popular and made good choices. At 12 she appeared on the cover of the Vancouver Sun under the title “So Good, So Young”.  She had set a record as the youngest person to ever win a medal at the Senior National level. I cut it out and put it in my diary to remind myself I had the same genes.

Strachan’s wedding 6 weeks before we lost him

She retired in 2008 after her third Olympics. 2007 was brutal for the Hartleys.  We lost Strachan in July after an all-consuming 21 month battle with cancer. It was exhausting and devastating. We were each left wasted to the full extent of the word. We lost one of our limbs. It took me at least a year to pick myself up and begin to limp forward. It happened only because day after day the sun continued to rise, regardless of how I felt. Eventually, I had no choice but to put one foot in front of the other.

That Blythe found fresh motivation through her loss made for a great media vignette and pulled on a lot of heart strings. But that says nothing of how hard it was. She once had to sprint to the bathroom to vomit after opening her closet and seeing Strachan’s sweatshirt. Another time, she drove all the way to the pool only to sit crying in the parking lot before heading home. While a whole lot of sympathetic friends and colleagues accepted that I could only half ass my way through life until I was good and ready, Blythe rose up and committed herself to an endeavour that demanded her absolute best. In the public eye, wearing a bathing suit on high definition television.

She went on to have a career best season, including a 4th place finish in her final Olympics. We watched in the stands with baited breath, 4th can be the toughest place. We released a collective sigh of relief and cheered our asses off when we saw her huge, genuine, beaming smile.

She later told me that the key to that year was to stop caring altogether.  She was competing for herself, her family and teammates. The only measure for achievement was whether she did her very best. She did. She gave her career best performance. That 3 people had even better days or that her scores would have medalled at any other Olympics in history had no bearing. It is every woman’s unattainable dream – to stop caring what others think and start using the right barometers for success, peace and happiness. Chalk it up to yet another impossible feat that Blythe has achieved.

She has since retired gracefully from sport and transitioned seamlessly into civilian life. Needless to say, she continues to excel. The last time I visited her office, her Vice President was so enthused about her that he high-fived me. She surrounds herself with outstanding friends, has chili cook-offs, plays flag football and finds pleasure in simple things. Her priorities are in tact, she is unpretentious and refreshingly humble.  Most importantly for me, she has the best laugh, sits on my feet when they are cold and I am always at home in her company.

Such an honourable maid

Watching someone grow up from the beginning is the most remarkable journey.  Since my earliest memories, I have watched Blythe in angst and in wonder. I still do. I have worried about every risk, wished I could protect her from every hurt and beamed with pride at every reward.  I apologize if you have barfed in your mouth while reading this, but knowing that the very person I have watched grow up since birth is the one who has lived the best life helps me believe that I matter.

So Blythe, before you fly across the world to kick my ass for writing this, know that nothing has made me more proud than the person you have become. Congratulations on the Hall of Fame; they have great taste.